Football players that go over the line of scrimmage and make contact with an offensive player prior to the snap are said to be encroaching. Additionally, encroachment happens whenever a defensive player touches the ball before the snap. The offence then advances five yards on their current downplay after the officials blow their whistle and declare the play to be a dead ball. When this occurs, referees blow their whistle to signify the end of the play and to safeguard the players who could otherwise conclude the action is finished since the penalty occurred.

Your excitement will increase after you become familiar with this penalty. This article will go through the definitions of offsides, false starts, and difference between the encroachment football penalty. 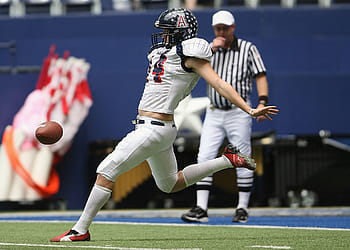 Football players are penalized for encroachment if they cross the line of scrimmage prior to the snap, make contact with an offensive player, or have a straight path to the quarterback.

This is different from receiving an offsides penalty since a defensive player can enter the neutral zone and still have time to return to their side before the quarterback initiates the play.

A five-yard penalty is assessed for encroachment in football.

Offside occurs when a player crosses the line of scrimmage before the snap. This frequently occurs when a player unintentionally crosses the line of scrimmage. However, there are times when some players might take a chance of going just a little bit over the line if they believe the official won’t notice, allowing them to get to the quarterback (QB) sooner on the snap because they are a little bit closer.

An encroachment occurs when a player crosses the line of scrimmage. The player may have lined up correctly at first, but for whatever reason, they jumped over the line. Additionally, when players make touch with a player on the other side—which is not necessary for offside penalties—an intrusion occurs. When a defensive player misunderstands the quarterback’s “hike call” and rushes in before the ball is snapped, a penalty of this kind occurs.

From the standpoint of a viewer, there may be uncertainty as to what constitutes a false start or encroachment during a football game, just like with defensive offsides. A false start occurs when an offensive player moves in any way before the ball is snapped, such as an offensive lineman shifting positions or crossing the line of scrimmage. Defensive players routinely receive the penalty for intrusion, whereas attacking players receive the penalty for false starts.

How many yards is an encroachment football penalty?

The penalty for encroachment is five yards. A defensive player incurs a penalty each time they enter the neutral zone. Encroachment football , offsides, or a neutral zone infraction are the three possible penalties.

How does the referee signal encroachment on football ?

What distinguishes incursion from a false start?

These two penalties are effectively at odds with one another. The only team that may invade is the assaulting team. When a player unexpectedly departs their set position, only the attacking team can start a false start.

Is it possible to get past an encroachment penalty?

Encroachment football is a penalty that cannot be played through, in contrast to offsides. If the offence agrees to the penalty, the referee must call timeout when the incursion is discovered and administer the punishment.

What causes players to encroach?

Although encroachment football is one of the most frequent football offences, it is less frequent than penalties like holding or false start. Because the defence tries to get a quick jump in close games, it happens even more frequently when stadiums are loud. The ability of players to practise patience and discipline is hampered by these kinds of circumstances.

What do football “fake plays” entail?

Teams that set up at the line of scrimmage as if they were going to snap the ball without actually doing so are executing fake plays. This can happen in a variety of circumstances, but it usually happens on fourth down in close-quarters games.

This is all about Encroachment Football Penalty. In American football, pre-snap penalties most frequently happen during the game. In the NFL, encroachment is not the most often reported infraction, but it does occur periodically. A quarterback will frequently use gimmicks and strategies to deceive a player into crossing the line of scrimmage, such as using hard counts to persuade a player who is attempting to go ahead of everyone to cross before they really “hike the ball.”

In a football game, an encroachment frequently resembles a false start or an offside. The requirement for a player to make improper touch with another player is one of the primary variances. A false start or offsides will occur if players move or position themselves outside of the line of scrimmage.

The major cause of penalties is a lack of discipline. Typically, a coach on the bench will speak with the player after a mistake. In order to avoid errors like these, players train. Sometimes while playing, players lose focus if a stadium becomes too noisy for them to hear each other or the opposing quarterback and makes the wrong move. These are the reasons players get penalties. Hopefully this article helped you to answer all your questions about Encroachment Football Penalty.